He burst on the grip scene when he nonchalantly stopped by the GNC Grip Gauntlet at the 2004 Show of Strength and before he left, Wade Gillingham and Randall Strossen looked at each other and said, "Joe Kinney!" 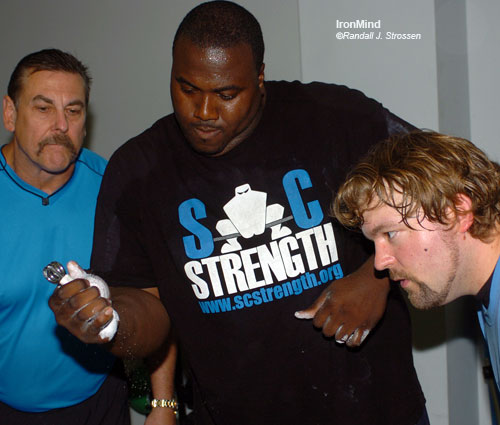 At the 2006 Global Grip Challenge - run by the Diesel Crew, hosted by Sorinex, and attended by many of the top, young grip guys as well as elder statesmen Richard Sorin and Randall Strossen, not to mention all-around really special MILO guy Steve "Inver Stone" Jeck - guess who made history on the No. 3 Captains of Crush® Gripper?

Tex did what nobody had done - under the strictest conditions to date, he slammed a No. 3 Captains of Crush® Gripper shut. The Diesel Crew's Jedd Johnson was refereeing the historic moment and when Randall Strossen turned to Jedd for his decision, asking if Tex had closed the gripper, Jedd said, "He destroyed it."

IronMind® has been at the heart of the grip world for two decades, and along the way, we have seen the need to separate the wheat from the chaff, and of this we are certain: Shedrick "Tex" Henderson has what it takes to honestly close a No. 4 Captains of Crush® Gripper and he's making progress toward that goal: Tex just told us that he's within about a 1/4-inch of doing it right now - and lest you think otherwise, rest assured that this is an above-board, no-monkey-business effort, proving, as Bruce Wilhelm says, "When you're strong, you're strong."