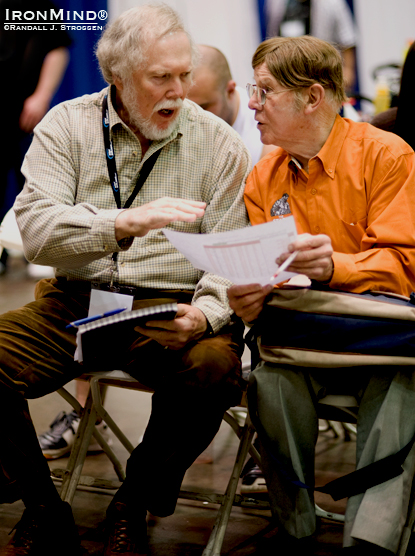 There’s a lot of iron game history on tap in those two seats: Dr. Terry Todd (left) and David P. Webster, OBE (right) compare notes as they watch the action at the FitExpo strongman contest (and the grip contest), with the goal of extending the last two invitations open to the 2011 Arnold strongman contest.  IronMind® | Randall J. Strossen photo.


Nick Best was second, and as reported earlier today on IronMind’s Twitter page, unofficially speaking, Terry Hollands and Nick Best were officially invited to the Arnold strongman contest today on the basis of their performance here.

Here are the final scores for the top ten:

This marked another step forward for the Los Angeles FitExpo and was another standout Odd Haugen strongman contest, as he opened the doors to up-and-coming strongman competitors who seized the opportunity to pit themselves against some of the top tier of the professional strongman circuit.