Olympic gold medalist Leonid Taranenko—the man who has the heaviest official clean and jerk in history—opened the WSF–World Cup strongman competition in Minsk, Belarus and handed out the awards, and “All the athletes were very happy to receive their prizes from the legendary weightlifter,” Vlad Redkin reported to IronMind. 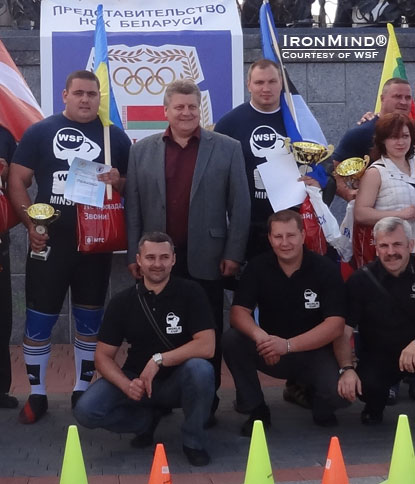 Leonid Taranenko (center) did the honors of opening the WSF–World Cup strongman contest in Minsk.  Taranenko’s mighty credits as a weightlifter include an Olympic gold medal and the highest official clean and jerk in history.  Taranenko is now the executive director of the Belarus National Olympic Committee office in Minsk, Redkin told IronMind.  IronMind® | Courtesy of WSF–World Cup.


“A lot of people saw and supported the athletes in competition. The weather was very good, but before and after was rain.  The weather is like strongmen!,” said Redkin.

Here are the official results from the contest (September 10):

“Next stages of this year planned in Uzbekistan and Russia in November.  But next competition will be in Belarus again on 24 of September: WSF BELAZ Strongman Cup 2011,” Redkin said, explaining that “OJSC ‘Belarusian Autoworks’ (BELAZ) is a major world manufacturer of mining dump trucks of heavy-duty and super-size load capacity, as well as the other heavy vehicles, being used in mining and construction branches of industry.