Svend Karlsen fans in Europe and America are in the money this spring and summer because the very popular Norwegian strongman will be competing in Norway, England and the US. 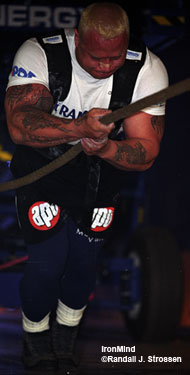 Right now, Svend reports that he's training hard and an insider told IronMind®, "He's really strong again," which is saying quite a bit.

Svend's spring schedule calls for competing in the Norway's Strongest Man contest on May 20, followed by a World Strongman Cup competition in England on May 27 and then the Mohegan Sun World's Strongest Man Super Series Grand Prix in the US on June 1.

In July, Svend Karlsen returns to the US for the Jim Davis contest in St. Charles, Missouri on July 3 - 4, and then he heads to Southern California, home of fellow Norwegian strongman Odd Haugen.