If you talked to Svend "Viking" Karlsen today, you would think the World's Strongest Man winner was set to go on holiday tomorrow or maybe it would just be another day in the office - in fact, tomorrow morning Karlsen undergoes kidney transplant surgery. 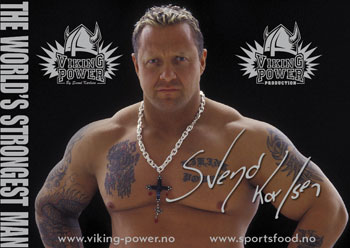 
Saying that it's a four-hour procedure, Karlsen sounded remarkably upbeat: "I am looking forward to it," he told IronMind®, explaining that the burden of living on dialysis is great.

"The chances of this failing are only 1 in 3,000," said Karlsen. "So the odds are on my side." Following surgery, Karlsen said he should be up, at least a little, in a day; and following one week in the hospital, he moves to nearby hotel where he will be monitored for a couple more weeks. In six to eight weeks, he should be able to resume training, Karlsen told IronMind®.

Explaining that dialysis takes six hours, three times a week, and is anything but pleasant, Karlsen said that, "It should be added to the UN list of tortures."