Just when you might be getting a little tired of shoveling snow and wearing four layers of clothes to stay warm, Southern California's FitExpo offers a change of pace, and if you're an up-and-coming strongman, February 17 - 19, 2006 could be your coming out party. 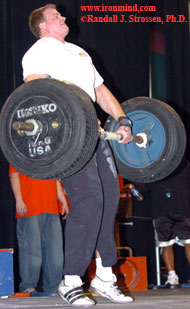 Dave Ostlund works some two-meter magic on an IronMind® Apollon's Axle™ fitted with tires at the 2005 FitExpo. Ostlund went on to qualify for the 2005 World's Strongest Man contest, where he made the finals and placed ninth overall. IronMind® | Randall J. Strossen, Ph.D. photo.

Ace strongman competitor and promoter Odd Haugen told IronMind® that he is planning to hold another strongman contest at the 2006 FitExpo, with the intention of giving American competitors a chance to strut their stuff: Do well enough and you just might get invited to a World's Strongest Man Super Series contest . . . the gateway to the World's Strongest Man contest, so here it is - this contest gives you an opportunity to get off the porch and go run with the big dogs.

In addition to Dave Ostlund, Jesse Marunde also went on from the 2005 FitExpo strongman contest to qualify for and compete in this year's World's Strongest Man contest, where he finished second overall, so the precedent has been set and maybe you can do likewise next year.

For more information on the 2006 FitExpo, please check the FitExpo official website and for details on how you can get into the strongman contest, please contact Odd Haugen: odd.haugen@gmail.com