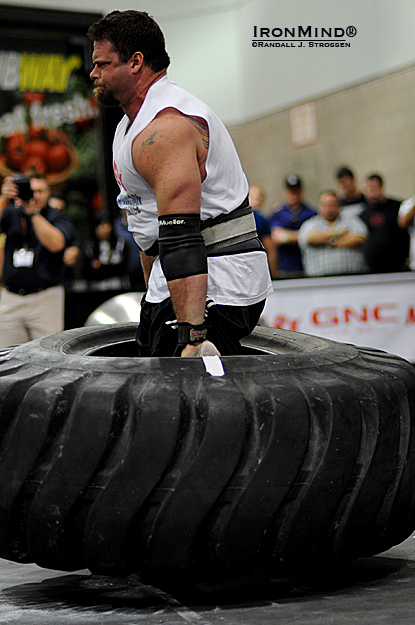 One of the unusual events Odd Haugen included for this contest was a tire deadlift with nothing to grab but the tire itself.  Mike Burke blew through this like nothing on his way to the overall win at the LA FitExpo today.  IronMind® | Randall J. Strossen photo.


Burke showed his strengths throughout the day, finishing with a bang as he won the Atlas Stones to clinch the title, and earned a guaranteed invitation to the Arnold strongman contest next month.

Odd Haugen said that runner-up Stefan Solvi Petursson “looked stronger than I’ve ever seen him,” and there was some speculation that he, too, might end up with an invitation to compete in Columbus.
Nick Best was battling a migraine headache but that didn’t stop him from posting a scorching time in the Yoke Race—there was talk of Best’s run being a world record; he was flying so fast that if the LAPD had been at the event, he might have gotten a speeding ticket.

Here are the final places and points, officially.