It’s about Stanless Steel, a man who levers sledgehammers and bends pieces of steel at will, a man who is certified on the No. 3 Captains of Crush® Gripper, and who has made lower arm strength his special home - but as filmmaker Zach Levy says, Strongman is also about a lot more. 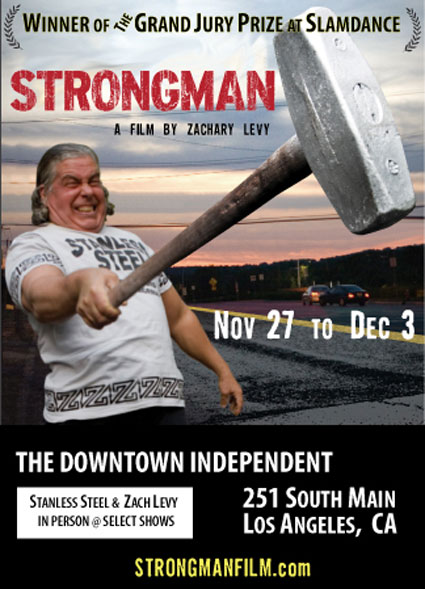 Stanless Steel is the star of Strongman, which opens in Los Angeles on November 27.  IronMind® | Artwork courtesy of Zach Levy.


Levy told IronMind® that he worked on this film for nine years, and he’s “cautiously hopeful” that it will be well-received when it opens at the Downtown Independent theater in Los Angeles because the reality in the film world, Levy explained, is that you don’t get a lot of second chances to build the kind of buzz that leads to more bookings . . . the big prize, “if we do well.”

Although this is a film about Stanless Steel and at that level it will appeal to everyone who can appreciate strength, especially the sort of strength that was more commonly displayed in a bygone era, it's also, “a broad film . . . about bigger things . . . what it means to be strong in a contemporary world and seeing Stan’s life as symbolic of the struggles and dreams we all have.”  Because of this, Levy sees Strongman appealing not just to people who lift weights, but also to “artists, painters . . . bus drivers, insurance salesmen . . . everyone.”

Strongman will be running from November 27 through December 3, and if you want to get a taste of the film, watch the Strongman trailer.