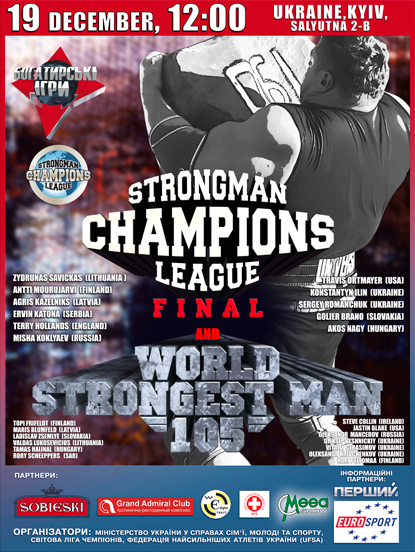 The 2010 Strongman Champions League Finals and the 105-kg Strongman World Championships are set for Kiev on December 19.  IronMind® | Courtesy of SCL.


“And on top of that we will do the same weekend the 105-kg Strongman World Championships in Kiev.”

“Theoretically, there are still 5 athletes who can win the SCL title,” said Mostert.  “Terry Hollands is the favorite, as he is leading the in the ranking, but Ervin Katona and Travis Ortmayer are close to him and even Misha Koklyaev will have a chance as there will be double points to earn on this last Champions League event of the season.  Five athletes of the start list are finalists from World’s Strongest Man this year, so the level is high.”

“Warrick Brant and Johannes Arsjo (both in the top 10 ranking) couldn’t come due injuries,” Mostert said.  “Therefore the new Finnish strongman Antti Mourujarvi got a chance to prove himself in this strong final.  It will be a fantastic final of the season 2010 with the strongest men in world.”

Both the SCL Finals and the 105-kg Strongman World Championships will be six-event competitions Mostert said, with event details to follow.