It’s the biggest list of contests in SCL history, which is saying something because in an era of stagnant-to-shrinking strongman contests, SCL is building each year and it’s no wonder SCL cofounder Marcel Mostert said to IronMind with a smile, “What do you mean recession?!” 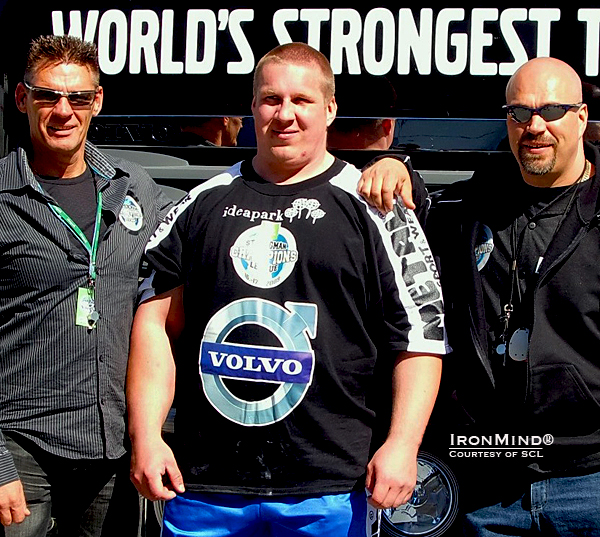 SCL founders Marcel Mostert (left) and Ilkka Kinnunen (right) flank SCL season champion Andrus Murumets (center).  Incidentally, Mostert calls Andrus Murumets Mr. Grip for good reason: Andrus Murmets is one of only three men in history to have certified on at the Captains of Crush No. 3, No. 3.5 or No. 4 gripper and held the world record on the Rolling Thunder.  In case your eyes swept over it, take a look at Andrus’ right forearm.  IronMind® | Courtesy of SCL.


“All events are televised, and most of them are  viewed in more than 70 countries,” said Mostert.

“There are a few specials in  this calendar, such as the World Championships Log Lift, Giants Live, the Guinness records and the first SCL SAVICKAS CLASSIC.

“And also new countries/organizations who signed up with us such as: Estonia, Poland, Turkey and Australia.  The Grand Finale will be done in Canada in an indoor area.

“We are looking forward to see who will be the 5th World Champion in SCL , after Zydrunas Savickas, Andrus Murumets, Terry Hollands and Ervin Katona in previous years and who will qualify for the World's Strongest Man through our league's cooperation with Giant's Live again in 2012," said Mostert.  "The kick off will be in 2 weeks, on March 9, in Lapland!

“Every strong athlete can compete in our league," said Mostert.  "All champions are highly respected and great to work with: Therefore we wish all the athletes great performances in the Strongman Champions League 2012!”

Keep your eye on the IronMind news column more updates and for full details please visit the official SCL website.