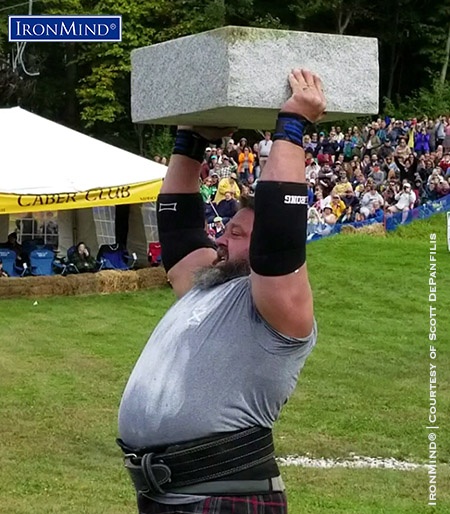 Strongman Steve Schmidt thrilled the crowd at the 43rd New Hampshire Highland Games & Festival as he set a new world record for the granite block press, and Scott DePanfilis called the action for IronMind.

On Saturday, September 22, 2018 during the 43rd New Hampshire Highland Games & Festival, “one of the largest and most diverse Highland Games held in North America,” the audience and fellow strength athletes witnessed the impossible become possible as 6' 2”, 340 lb. professional strongman Steve Schmidt pressed a 352 lb. granite block over his head. The 25,000 plus Highland Game fans went crazy!

The judge was non other than Magnús Ver Magnússon, which solidified the world record perfectly.

Steve is 43, lives in Columbus Grove, Ohio, and trains at Savage Barbell, a two-car garage gym he built at his house.

In 2017, Schmidt set a world record pressing a 340-lb. metal block at the America’s Strongest Viking Competition. Then he was invited to go head-to-head pressing a granite block in competition against Hafpor Bjornsson, the Mountain on Game of Thrones, at the New Hampshire games the same year. They tied at 341lb., but that set the wheels in motion and Steve will be competing at the Arnold Strongman Classic Crown, COLUMBUS, Ohio (March 2-3, 2019)