Can you imagine this: I was coming off writing SUPER SQUATS and here he was, a Bulgarian professor standing in the back room of The Sports Palace telling us not only that squats were not very useful for weightlifting, but also that Bulgarian weightlifters had replaced them with step-ups. Step-ups?! 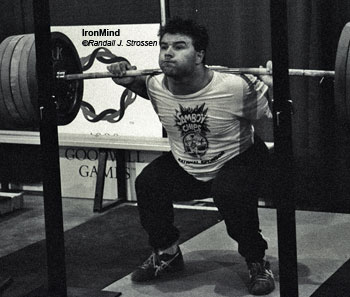 Stefan Botev (Bulgaria) back squatting at the 1990 Goodwill Games. Competition Director Tom Hirtz was probably the only person who spent even more time in the training hall than Randall Strossen, so the next time you see Tom, ask him how many Bulgarians were doing step-ups there. IronMind® | Randall J. Strossen, Ph.D. photo.

A steady diet of Peary Rader and John McCallum articles during my formative years, not to mention much actual knee bending, had revealed a universal truth to me: If you are interested in strength, bulk or power, there is no substitute for squats, and since I had just been immersed in the subject as I was writing the book SUPER SQUATS, you can imagine how jaw-dropping it was to hear Angel Spassov tell us that squats had been replaced by step-ups. Spassov had come to the US in 1989 as part of an NSCA-USWF (USAW) program, lecturing on "The Bulgarian Approach to Maximal Strength and Power Development," and I had the chance to attend back-to-back seminars at the Fairfax Weightlifting Club and at the Sports Palace.

Of course, everyone tried step-ups right after this lecture series and the idea was given wider exposure by a Muscle & Fitness article, written by Angel Spassov and Terry Todd, entitled "Bulgarian Leg Training Secrets." For my part, because they made my kneecaps feel as if they were about to separate from my leg and blast into the wall, I returned to still more squats. The following year, I had a chance to see Bulgarian weightlifters in the flesh at the Goodwill Games and one of my first questions was about step-ups.

Stefan Botev politely but firmly told me that I must have misunderstood something because Bulgarian weightlifters never did step-ups, but of course they squatted frequently and heavily - something I can attest to now, being lucky enough to have seen Bulgarian weightlifters training from Spokane to Sofia to Santo Domingo, and many points in between. Subsequent to my first talk with Botev about this, I confirmed this with Ivan Abadjiev, and the three of us have since laughed about this more than once.

Leonid Taranenko told me that he has included step-ups at some points in his training, but for all the hours I have spent watching the world's top weightlifters train all over the planet, I have never seen one perform even a single rep in the step-up, although I have seen many, many squats. 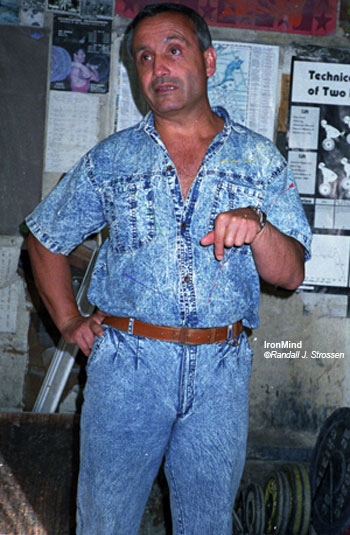 Want to swap step-ups for squats if you're a weightlifter? If you believe this is a good deal, I'd like to offer you the Golden Gate Bridge, for a very good price.