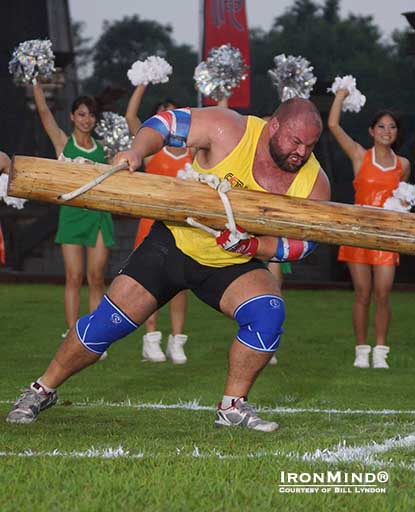 Who will prevail, the Vikerboks or the Vikeroos, and who will get the golden invitations in the first qualifier for World’s Strongest Man 2013?  Warrick Brant (shown competing in SCL China) will be representing Australia and is expected to be big factor in the final outcome.   IronMind® | Photo courtesy of Bill Lyndon.


“Both Australia and South Africa have a fierce rivalry in many sports including rugby and cricket being the main staples, but with this strongman challenge a new test arena has been established between the newly named teams’ mascots the Vikerboks (South Africa) V’s the Vikeroos  (Australia), which is sure to start a fierce rivalry in strength sports across our very big pond.

“The Southern Hemisphere athletes in the Giants Live [World's Strongest Man qualifier] are:

“As a second part to the International Challenge we will have a top field of athletes in the <105 Southern Hemispheres Strongest Man (the first) with a fast paced 5-event 2.5-hour show.

"These are the competitors for Southern Hemisphere’s Strongest Man under 105:

“Team Champions, on top of this great new international initiative for these two sporting rivals the Southerners are preparing to show the Northerners that they will need to perform at their absolute best to wrestle the three spots on offer for World's Strongest Man 2013 from the main Event Giants Live @FitX Melbourne, Australia," said Lyndon.