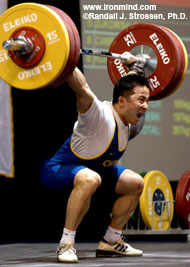 Shi Zhiyong sticks this 160-kg snatch on his way to sweeping the gold medals in the 69-kg category at the World Weightlifting Championships tonight. IronMind® | Randall J. Strossen, Ph.D. photo.

Of the long ball hitters, Lee Bae-young (Korea) opened first in the snatch, with 147, which he missed out front. He came back to make a very nice success with the weight. Shi Zhiyong (China) raised the stakes by blistering 152 kg on his first attempt, a weight that Lee matched with a very impressive second-attempt lift. Shi wasn't planning to leave any doubt about how well he can snatch, as he uncorked a smooth and powerful success with 157 kg on his second attempt and then he frosted the cake with 160 to really drive a wedge between himself and the rest of the class.

France had a chance at a medal tonight and they got it when Vencelas Dabaya jerked 179 kg on his first attempt - a lift that would hold up for the bronze in jerk and in the total. Shi made a very nice opener with 180 kg, power jerking it with ease. Lee Bae-young (Korea) is known for his big clean and jerk, and he opened with a very nice 185, done smoothly, although he had to walk a couple of steps to stabilize the weight overhead. Dabaya missed the jerk on 185 and then Shi made had a solid success with the same weight, once again power jerking it. Dabaya, trying for gold medal position in the jerk, took 186 on his third attempt, but missed the jerk behind. Lee, also going for the gold in the jerk, called for 190, cleaned the weight, but then missed the jerk, almost getting clocked in the back of the head in the process. Shi finished off a perfect night with another great lift with 190 kg.

Lee, taking the last lift of the category, called for 191 kg, again going for the gold medal in the jerk, but he couldn't rack the weight.