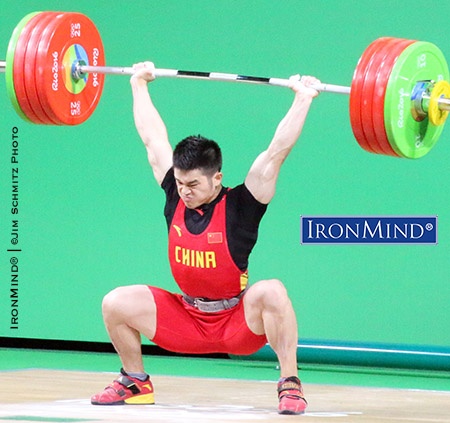 Shi Zhiyong (China) won the men’s 69-kg class in weightlifting at the Rio Olympics. Shi cleaned 198 kg in an attempt to break the world record in the total, and had the weight overhead, but he lost the lift as he tried to stand up. IronMind® | ©Jim Schmitz photo

Another very exciting day and close competition with China coming out on top in both the men’s 69s and the women’s 63s,” Jim Schmitz reported from Rio.

The Turk lifter Daniyar Smayilov and Shi Zhiyong (China) went lift for lift in the snatch, as both did 156 and 160, then Shi did 162 followed by Smayilov’s 163.

Shi now took 198 to break the world record in the total: he cleaned it very well, squat jerked it, but lost it as he tried to stand up.

The Bronze medal went to Kyrgyzstan’s Izzat Artykov, who beat Colombia’s Javier Mosquera by 1 kilo, 339 to 338.  This is the first Olympic medal won by a Kyrgyzstan lifter since Kanybek Osmonaliev won the Gold Medal in the 52 k class at the Moscow Olympics in 1980.