With only Scots competing, Colin Bryce is hosting the Scottish Native Heavyweight Championships this weekend, “the first Highland Games of the year.” 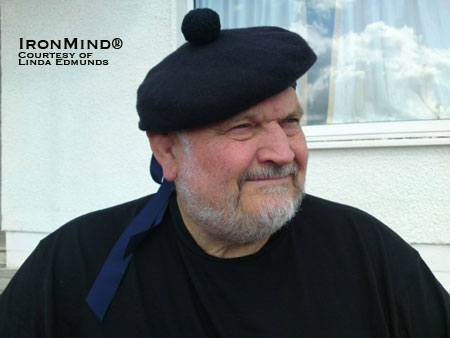 Rumor has is that Dr. Douglas Edmunds will be attending tomorrow’s Scottish Native Heavyweight Championships, so if you want to meet the man known as the Godfather of Strongman, this might be your opportunity.  IronMind® | Courtesy of Linda Edmunds.


"Here is the official lineup:

“All the action kicks of Saturday at 12 p.m. at Rouken Glen Park, Glasgow.  Entry is free and there will be competitions for amateur strongmen and kids,” said Bryce.

And although IronMind can’t guarantee it 100%, if you swing by, in addition to catching the action on the field, you might have a chance to say hello to Dr. Douglas Edmunds, "the Godfather of Strongman. "

Visit the IronMind Forum: discuss this article, talk strength, get help with your training.