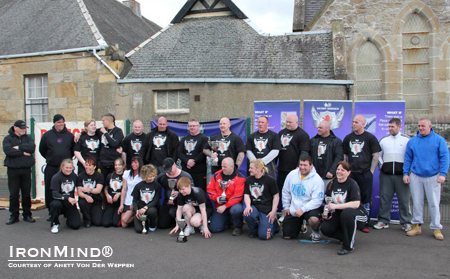 
“There were two classes for the Woman under 75 kg and over 75 kg.  Every discipline was Last Woman Standing, so that some women competed 3–6 times in every event.  It took some time, but it was great to see how hard these girls compete,” Anett Von Der Weppen reported to IronMind.

This was a five-event contest:

“Unfortunately Bernie had to withdraw from the competition due to illness—we wish Bernie a speedy recovery.  It was a very, very grueling day and the ladies didn't just do these events once: some girls were up to four and five times.  The friendship between the girls was fantastic.  It was such a fantastic day.  I was very, very impressed with everyone.  This comp was run by B.I.G. S.I.S. (British, International & Global Sisters In Strength,” said Von Der Weppen.

Asked about additional contests this year, Von Der Weppen told IronMind, “There will be a competion at the 19.05.2012 in Öhringen, Germany and a competion in Iceland in August.  I can send you more Information for this one,” so stay tuned.