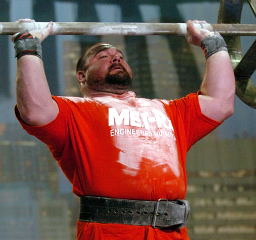 Schoonie pressing the Apollon Wheels at the 2004 Arnold Strongman competition: It might not be on the Olympic program any more, but pressing remains a fundamental test of strength, and if you made a short list of the top pressers in strongman, you'd find Brian Schoonveld's name in the thick of things. IronMind® | Randall J. Strossen, Ph.D. photo.

Day two will continue with:

Odd Haugen just received a 410-pound natural stone as his anniversary present and it will be included in the loading event. "It's a great lifting stone - very challenging," Odd said, but he noted that he lifted it, in front of witnesses, the first time he tried, so he feels it is fair to include it in the contest.

As a typical Odd Haugen strongman contest, expect things to be "heavy, short and sweet," and to drive the point home, Odd said, "Somebody very strong will win."

Mark your calendars for the FitExpo: Pasadena, California, February 18 - 20, and keep your eye on the FitExpo's official web site for more details.