"Zydrunas Savickas told us that he is going for a world record in the log lift," Marcel Mostert said, talking about this weekend's IFSA Holland Grand Prix. 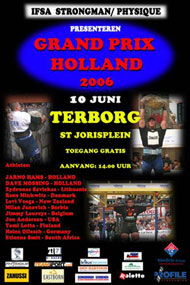 Zydrunas Savickas will be going for 207.5 kg in the log lift this weekend, Marcel Mostert told IronMind, for what would be a new IFSA world record. IronMind®

The current IFSA world record is 202.5 kg and it's held by Zydrunas Savickas. Savickas did 205 in log in Moscow, Mostert explained, but because it wasn't on an official piece of IFSA equipment, he said the lift was unofficial.

The stainless steel IFSA equipment will be used in Holland, Mostert said, and along with the log lift, the events include a Conan's wheel, the Atlas stones, a truck pull, a washing machine carry and a tire flip plus loading medley.