Considering that Magnus Samuelsson has won the World's Strongest Man contest and is known as having the world's strongest arms and grip, not to mention what he can bench press, you would think that he'd be content to rest on his laurels. 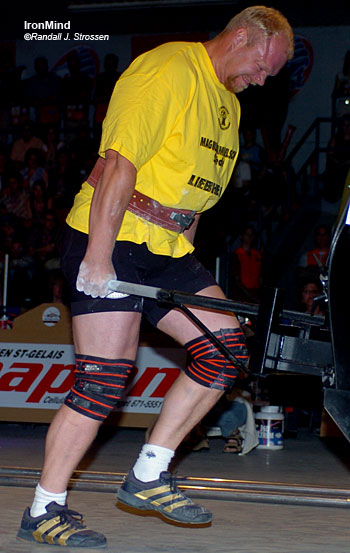 Quite the opposite, though, because the man who is undoubtedly among the most commercially-successful strongmen is always thinking of and working on new projects, and the latest will be a new TV series that he sees as a lot fun: Things might start off at the Samuelsson family farm and then the action continues as Magnus drives, for example, his '77 Firebird to the gym and ends up back home in the kitchen, cooking something to eat . . . all in the spirit of having a good time. Magnus said that his idea is to strive for things that allow him "to combine what I like with work and can make a job out of it," and part of the idea behind this TV series is to provide a counterpoint to the stereotype that huge guys take themselves too seriously . . . "We will use humor," Magnus told IronMind®.

His back is still borderline, but Magnus said that while he "can't promise it right now," he hopes to be 100% ready for competition this year, with the goal of winning the World's Strongest Man contest again.