It's not just that Sam Solomi has certified on the benchmark No. 3 Captains of Crush® gripper - as a mere 19-year old, his tremendous accomplishment means that IronMind® is contributing US$500.00 to the educational fund for Jesse Marunde's children. 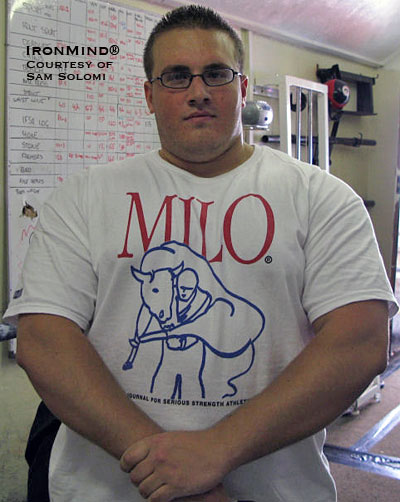 Sam Solomi just certified on the No. 3 Captains of Crush® Gripper - the first teenager to hit this mark since IronMind® made its pledge toward the educational trust fund of Jesse Marunde's children. IronMind® | Photo courtesy of Sam Solomi.

In memory of Jesse Marunde, "the first teenage Captains of Crush®," IronMind® pledged to contribute US$500.00 to the educational trust fund for his children each time a teenager matched this tremendous feat of strength, and England's Sam Solomi is the first person to hit this mark.

The stoutly-built 5' 8" 280-pound Solomi has been training since he was 15 and he is the co-owner of a strongman gym, where he says, "We have just one rule which is TRAIN HARD."

Watch for much more from Sam Solomi in the coming years, but for now, he's the first teenager to hit this prestigious mark since IronMind announced its intended contributions: Congratulations, Sam, you have just been certified on the Captains of Crush® No. 3 Gripper.

IronMind would also like to say a word of special thanks to Brian Phillips, who despite a very demanding work schedule managed to make time to serve as Sam's official witness, for which we are deeply grateful.