“After an early start, we headed off to Zhengzhou airport for the last three events of the qualifying round for the finals,” Strongman Champions League cofounder Ilkka Kinnunen reported to IronMind today. 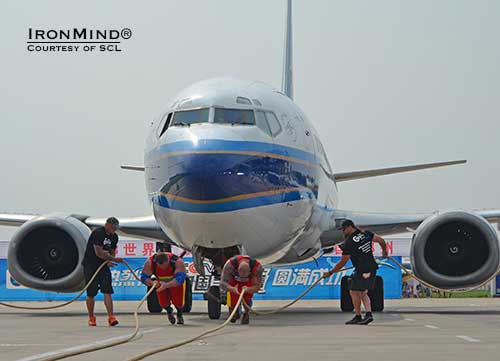 Zydrunas Savickas and Hafthor Bjornsson team up to pull a jet at SCL China, billed as the contest that would supersize strongman.  IronMind® | Photo courtesy of SCL.


“Again, temperatures were high, and the athletes were very motivated, as this was their last chance to make it to the top twelve.

“The most difficult challenge was the plane pull, which was the heaviest event for the day.  The winners for the day were on the Red team, with Zydrunas Savickas as the team leader.”

The 12 strongmen who made it to the finals are: