Californian Rusty Price has been chalking up victories on the Scottish Highland Games circuit this summer and he just added the prestigious Braemar title to his collection, in front Her Majesty Queen Elizabeth and Prince Philip, Duke of Edinburgh, along with a crowd of 20,000 spectators. 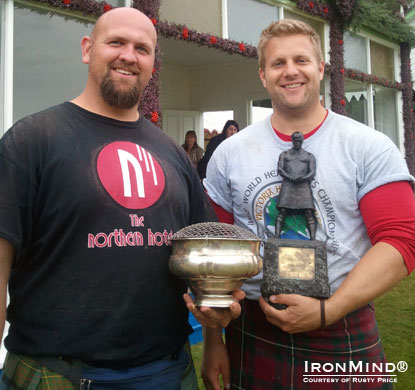 America’s Rusty Price ended his two-month stint on the Scottish Highland Games Circuit on a high note, winning the Royal Braemar Highland Games.  The very strong lineup of heavy athletes included Price, Scott Rider, Gregor Edmunds, Stephen King, Bruce Robb, Lucas Wenta, Lorne Colthart, and John MacLeod, who battled it out before the Royal Braemar party which included Her Majesty the Queen, the Duke of Edinburgh, and a crowd of over 20,000 packed to capacity.

In the opening event, 16-lb. open stone, Poland’s Wenta, who has been in good form this season with stone putting, took the first win of the competition with a sensational put of 57’ 11”.  Rider placed second with 56’ 10” and Price third with 51’ 4”.

The 28-lb. weight-for-distance was won by Rider, former Olympic bobsleigher and Commonwealth Games shot putter from England, who stole the show with an awesome throw of 86’ 6” and established a new ground record.  Second went to Robb at 79’ 10” and third to Price at 79’ 9”.   The real shocker in this event was Scotland’s Gregor Edmunds placing seventh with a well under par throw of 74’ 6-1/2”.

The 56-lb. weight-over-the-bar ended in a tie between Wenta and Price at a height of 16’; second equal were Rider and Colthart at 15’ 6”.