Russian grip strength star Alexsey Tyukalov has confirmed with IronMind that he will be competing the IronMind Record Breakers grip contest that is part of Odd Haugen’s strength fest at the Nor Cal FitExpo in June. 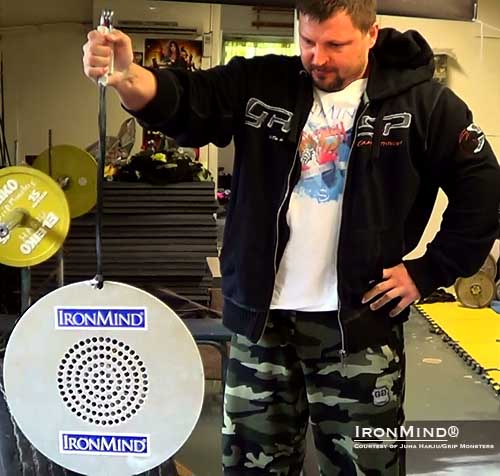 Alexey “Tank” Tyukalov destroyed the men’s world record in the CoC Silver Bullet Hold on September 29, 2012 with a huge time of 52.49 seconds.  For men, the challenge is to use a No. 3 Captains of Crush gripper to hold a CoC Silver Bullet with 2.5 kg hanging from it for as long a possible.  IronMind® | Photo courtesy of Juha Harju/Grip Monsters.


Tyukalov is certified on the Captains of Crush No. 3 gripper (CoC3 ’12), has unofficially succeeded with world record weights on the Rolling Thunder and he held the official CoC Silver Bullet world record until it was broken by Michael Burke at Haugen’s grip contest at the Los Angeles FitExpo last January.

IronMind is thrilled to be able to welcome Alexey Tyukalov to California and this sets the stage for a matchup between Tyukalov, the former world record holder on the CoC Silver Bullet Hold, and Mike Burke, the current world record holder in that event.  Tyukalov might also be planning an assault on the Rolling Thunder world record, the exclusive domain of Mark Felix since 2008, so if you want to see grip strength at its highest, mark your calendar for the 2013 Nor Cal FitExpo, June 29–30 in Santa Clara, California.

Follow this link for full details on the IronMind Record Breakers.