Almaty—The 85-kg class at the World Weightlifting Championships was expected to be a tight battle with an abundance of big numbers. 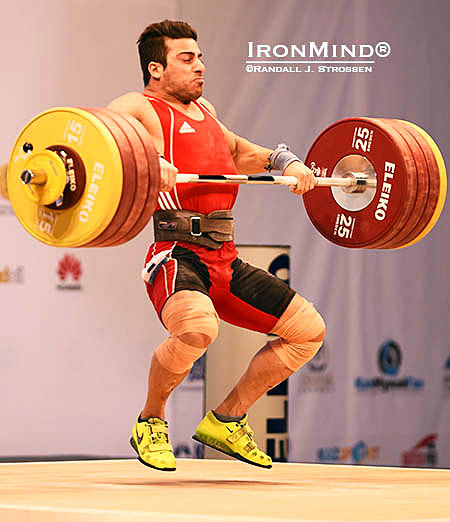 Kianoush Rostami (Iran) pulls himself under 213 kilos, in what proved to be the winning lift for both the clean and jerk, and the total. IronMind® | Randall J. Strossen photo


There were some unexpected twists and turns but the final positions were in the balance until the last clean and jerk when Tian Tao (China) had a close miss with what would have been a game changing clean and jerk.  Ivan Markov (Bulgaria) earned the gold medal in the snatch via three good lifts, ending with 179 kg, one kilo ahead of Kianoush Rostami (Iran). World record holder Andrei Rybakou (Belarus) had to settle for one good lift, 175 kg, and the bronze medal.

The clean and jerk was a bloodbath and a battle of nerves as Rostami missed his first two attempts. On his first attempt, he did nearly a 360-degree turn trying to control the bar overhead and get the down signal, before dropping the bar. He went up one kilo, to 212 on his second attempt but missed racking the bar. Back against the wall, he went up another kilo and made a good lift and was in gold medal position, but Tian Tao had one attempt left.

The way Tian bounded up to the stage he appeared fully confident about making the lift: following a strong clean, he collected himself, dipped, rammed the bar up, reversed directions and squatted under it. It looked as if he had it, but the bar wasn’t quite fixed and it crashed down at the last moment, leaving Tian sorely disappointed and Rostami elated.