Speaking of the Latvian Strongman 2010 series, which opened on Saturday, Vlad Redkin told IronMind® today, “Our competition was very good with 18 athletes and we are happy.” 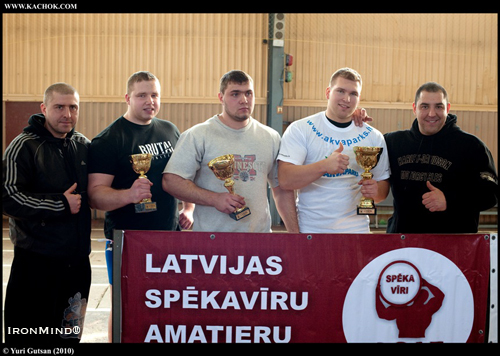 
“We saw new faces,” Redkin said.  “The competition was filmed and we will broadcast all stages on Latvian TV.”

Here are the top ten from the first stage of the Latvian Strongman 2010 series.

In March 27, Redkin said that there are plans to hold an international contest in Riga, featuring teams from Latvia, Georgia and Uzbekistan, and the second stage of Latvian Strongman 2010 will in Riga on June 5.