Athens – Hossein Rezazadeh (Iran) was in a class by himself in weightlifting's +105-kg category at the Olympics, but don't think there wasn't plenty of excitement along the way. 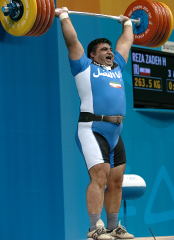 Picking up with the leaders, Ronny Weller (Germany) opened first, smoking 195 kg in the snatch. Viktors Scerbatihs (Latvia) was next of the top guys, and he made a very nice lift opener with 197.5, although he had to adjust slightly in the bottom position. Ashot Danielyan missed 200 kg on his opener and each successive attempt with the same weight looked worse than the one before, so he was out.

To put this in context, Rezazadeh also opened with 200, but after he smoked the lift, he raised his index finger, telling everyone who owned the place. Weller blew up 200 on his second, but he lost it behind, and that spelled trouble in a bigger way than we guessed, but when he didn't come out for his third attempt, we feared the worst and it turned out to be true—Weller injured his shoulder and was out.

Scerbathis made another very nice lift with 202.5 on his second attempt, but once again had to adjust a little in the bottom, and then made his best lift with 205 kg on his third—all business and well done. Rezazadeh did the same thing with 207.5 that he had done with 200, and then made another easy lift with 210 kg, to consolidate his lead over Velicho Cholakov (Bulgaria), who had stuck, in order, 200, 205 and 207.5.

Of the leaders, Cholakov opened first in the clean and jerk, taking and making 240, but in a sign of things to come, he had to walk forward to save the jerk. For his second and third attempts, Cholakov cleaned 245 and ran forward to try to save the jerk. Both times, when he dropped the bar, it hit the front edge of the platform, creating a 245-kg missile moving straight toward the edge of the stage. Both times, Cholakov beat the bar to the barrier, and seemed to be calm about watching it crash into the protective steel frame, mere inches from him, even as center referee Alexander Kurlovich was bailing out of his seat. Scerbathis might not have been as dramatic, but after opening with a smooth 242.5, he lost the jerk with 247.5 on his second attempt. Undaunted, he moved to 250 on his third, for a nice success and silver medal position.

Rezazadeh had opened with 250, practically making it look like the barbell was made from balsa wood, and then with the gold medal in hand, he called for 263.5 kg for a world record in the clean and jerk. The weight looked light, but the bar must have been a little out front when he racked it because he dropped the bar when he was about three-quarters of the way back up with it. Not content to call it a night, though, he blew it up on his third attempt and held it overhead with apparent ease and with evident satisfaction in proving once again just who's the king of the jungle.