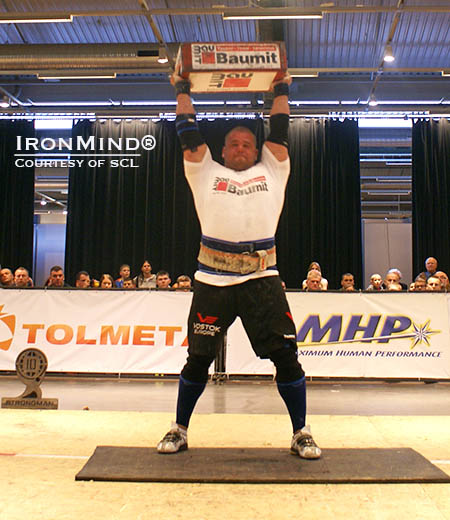 Rauno Heinla on the Block, part of the Overhead Medley at SCL Lithuania/Savickas Classic this weekend, where Heinla got his first Strongman Champions League victory. IronMindr | Photo courtesy of SCL


“Heinla has been competing successfully, of course, at the international level and being on the podium, but now winning in a toughtlineup brings him a few steps forward. Even Zydrunas Savickas praised Rauno´s performance after the competition.

“The competition started with a Tractor Pulling with Harness and Rope. Total distance of 20 m. Lithuanian Vidas Blekaitis pulled the fastest, with a time of 22.19 sec, followed by Slovenian Mattias Belsak who just a week ago turned 22 years old. His time was 22.31sec and third was Dutch school teacher Alex Moonen, at 22.59 sec.

"The last event in SCL Lithuania was a Tire Flip (350 kg) and Barrel loading medley: Five flips and then carrying 100-kg barrels to a platform ended the 2014 Savickas Classic. The fastest in the Medley was Rauno Heinla, at 34.19 sec; second was Marius Lalas, 37 sec; and third was Dainis Zageris, 37.50 sec.

“There is a new leader again now in the SCL series: Martin Wildauer took the yellow shirt back from Ervin Katona. Ervin got injured already in Romania (biceps injury) and could not participate in this competition. He needs rest now and hopefully we will see him in finals fully covered.

“Also Kryzsztof Radzikowski, who won three SCL events in a row had really bad luck the first day with the Manhood Stone and lost his battle for the second day. But for sure in Estonia we will see again different Kryzsztof who wants to win the 2014 SCL series. So lots of excellent fights coming up in the next competition on October 18 at the MHP SCL Estonia.

Big thank to Zydrunas Savickas and his crew putting out excellent event once again.”