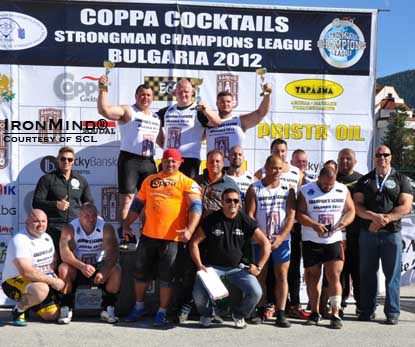 SCL–Bulgaria was won by Rafal Koblarz, possibly a strongman star of the future.  IronMind® | Photo courtesy of SCL.


“With Konstantin Ilin in the Coppa leader shirt as the highest ranked strongman in this event, along with Paul Pirjol, Rob Frampton and runner-up of 2012, Saulius Brusokas, we did expect the winner would come of these men.

“But nobody expected Rafal Kobylarz as the surprise winner.  Wow, strongman can be still surprising, even for us.
“He came silently, slaughtered the all strongman that day with a bang, and went silently back to his country, Poland,” said Mostert of the 1.98 m tall, 150-kg, 23-year old strongman.

“Well done from Rafal and we are sure we will hear more from him soon,” said Mostert.

“Saulius  Brusokas and Paul Pirjol came second and third in the final result, in a beautiful 25 degrees sunny weather with the great mountains from Bansko in the background.  With thanks to Miron Jordanov from the Bulgarian Strongman federation and his crew it made it  a very nice weekend.

“Now we are moving on for the next stage Strongman Champions League, October 6–7, the SCL Lithuania in Vilnius in the first official Savickas Classic. Will be an interesting weekend then again.”

Also, on Friday, September 28, SCL–Poland will be broadcast on Eurosport at 20.00 CET.