The World Strongman Cup is coming to Minsk, Belarus this weekend, and series manager Martin Muhr told IronMind®, "We are waiting for a new fight between Mariusz and Jesse, and of course Raivis, because he placed second in Riga in the first World Strongman Cup contest this year." 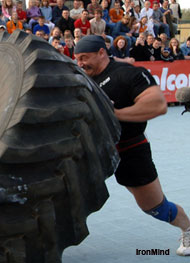 "We are also looking forward to the new guy from Norway, Arild Haugen . . . [to see what he] can do to the big names." Haugen, who has been described as looking something like a bigger version of Mariusz Pudzianowski, created quite a splash at Norway's Strongest Man earlier this year, and in a move that might signal his interest in crossing over to the NFL, IronMind® heard that he is coming off a recent motorcycle accident . . . from what we hear of Arild Haugen, it's the pavement that might have gotten the worse end of the collision.