Set in the Tapout Research and Development Training Center in Las Vegas, the USA debut of the Professional Armwrestling League (PAL) last night featured two redhot matchups that were not to be missed, even if there were no tickets for sale . . . admission was limited to a guest list for this by-invitation-only event. 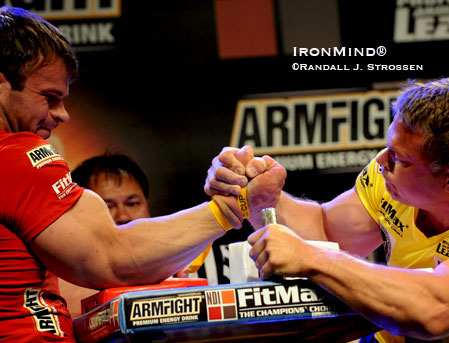 The PAL supermatch format for what it calls “arm fights” is six rounds of arm wrestling, with two minutes' rest in between rounds.

Warming up the crowd were Michael Todd (USA) and Ion Oncescu (Romania) - two top-ranked arm wrestlers.  Although Michael Todd ended up winning all six matches, the battle was closer than that scorecard might suggest.

As great as Todd and Oncescu are, they were the preliminary bout, and the main event had the crowd electrified because it featured John Brzenk (USA) and Denis Cyplenkov (Russia).  John Brzenk’s accomplishments in arm wrestling are staggering, but what he was up against in this PAL supermatch was an arm that had even this seasoned crowd gawking - announced as being over 24 inches, the arm of Denis Cyplenkov has to be seen to be believed and next to the Russian wonder, John Brzenk looked small.

Of course, old timers remember how seriously outgunned John Brzenk was when he he met up with Rich Lupkes at Petaluma in 1988, and how John pulled off a victory in the tradition of David versus Goliath.  Could he do it again?

The answer was a resounding yes, as John Brzenk won the first five matches, and seemed to gain confidence as he went along - further burnishing what is the biggest name in the history of arm wrestling.