Mohegan Sun - Maybe nobody took him seriously when Derek Poundstone said that he thought he was the guy to beat Mariusz Pudzianowski, but that's exactly what he did tonight at the WSMSS Mohegan Sun Grand Prix. 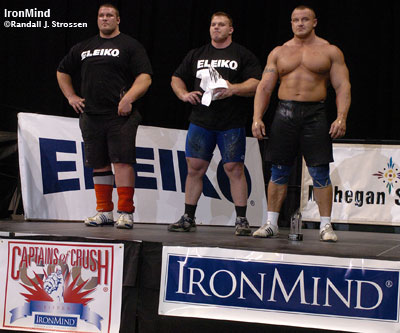 
Poundstone got off to a roaring start, sort of, when he ran away from four-time World's Strongest Man winner Mariusz Pudzianowski in the medley, but there was a hiccup at the end - Poundstone thought he had crossed the line on the frame carry, but actually was inches short and when he went back and got the apparatus past the finish line, the officials turned it down.

Fast forward to the second-to-the-last event, and Poundstone, a local police officer, was five points behind the Polish superstar. On paper, Poundstone could still win, but he would have to take first on the final event, the Atlas stones, and Pudzianowski would have to finish worse than third - not something too many people might have bet on.

Nobody made the fifth stone, but Poundstone had a blistering time on the first four, winning the event, while Mariusz came in fifth in the event, which dropped him to second place overall, followed by Terry Hollands