He did what many would have thought impossible - winning the World's Strongest Man contest - but just when the strongman world thought Phil Pfister had hung up his harness, guess who told IronMind®, "I have an interest in competing in Fortissimus 2009." 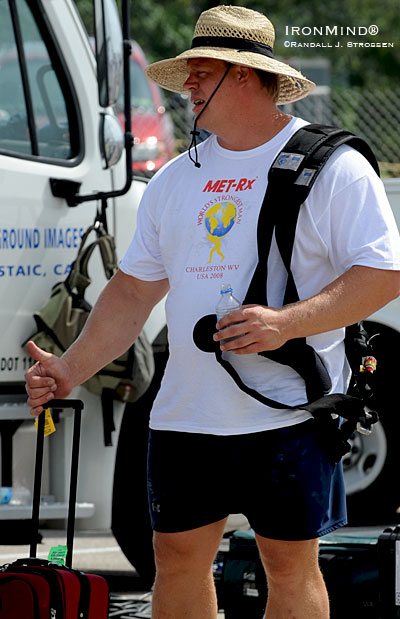 "Have harness, will travel." 2006 World's Strongest Man winner Phil Pfister is ready to hit the road - he'll be competing in this year's Arnold strongman contest and he wants to be invited to FORTISSIMUS, too. IronMind® | Randall J. Strossen photo.


The key parties are now in direct contact with each other, but one thing seems clear to IronMind®: Phil Pfister could be a major factor in this contest.

"I thought I was retired," Pfister told IronMind® today, confirming that he was, in fact, competing in this year's Arnold strongman contest, as he explained that he changed his mind and now he's planning his 2009 competitive season.

"FORTISSIMUS has been in the back of my mind," Pfister said, commenting on the novel aspects of the competition and the fact that he thinks the range of events is well-suited to testing who's really the strongest man in the field.

"Can you win?" IronMind asked the 2006 World's Strongest Man winner.