“Two athletes of the Professional Strongman League of Ukraine (PSLU) will compete in the Arnold Amateur [strongman world championships] and before their departure we organized a record show in Kiev,” PSLU Vice President Alexander Glyvynskyy told IronMind today. 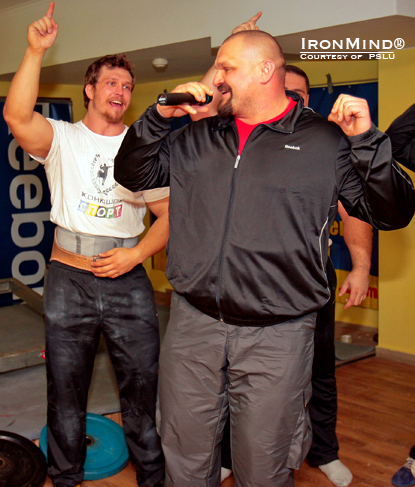 World’s Strongest Man winner and president of the Professional Strongman League of Ukraine Vasyl Virastyuk leads everyone in a song.  That’s Sergiy Konyushok to the left of Virastyuk.  Photo courtesy of PSLU.


“Remembering about previous discussions, we invited head of the national ‘Records Book of Ukraine,’ [and this] event was observed  and results was confirmed by this official gentleman.”

Preparing for the  Arnold Amateur World Strongman Championships, which will be hold during Arnold Sports Festival on the 3-6 of March in Columbus (Ohio, USA), Ukrainian strongmen Sergiy Konyushok and Oleksandr Lashyn have put their names to the national “Record book of Ukraine.”  Both athletes of the Professional Strongman League of Ukraine achieved best results in the country with different equipment but with the same weight.

Konuyshok  made 3 reps with  145-kg  log  in 30 seconds and Lashyn 4 reps in 60 seconds lifted 145 kg  on an axle.  This weight and equipment were chosen by PLSU  according the Arnold Strongman Amateur tournament program that includes Log Lift and Ironmind Axle with almost the same weight.

Sergiy Konyushok and Oleksandr Lashyn have achieved the national records that  was confirmed by referee Vasyl Virastyuk (president of the Professional Strongman League of Ukraine) and head of the national “Record book of Ukraine” Igor Pidchibiy.  Athletes competed “without records” in 350 kg Side Handle Deadlift.  Lashyn made 14 reps in 60 seconds and Konyushok made 15 reps, with the time enough left  make more reps.

30 mass-media representatives covered this event that has become the  record show and  open training session  that  took place in the fitness-centre “Konyushok Sport” in Kiev, Ukraine.

In conclusion of the sport evening president of the Professional Strongman League of Ukraine Vasyl Virastyuk  performed an anthem of the League song Only We Are, together  with athletes.

After that, World Strongest Man winner wished to  Konuyshok and Lashyn to make good sport performance at the Arnold tournament and gave them some  advice:

“I have never thought of victory while performing on the tournament, I have come to the tournament to  fight.  We are the warriors and we have to prove ourselves, to our fans and to Ukraine that we are real men and we are real athletes.  You have to show your character  and you fight conditions. Only in this case you can come back home with the feeling that you have done everything you could.”