This Friday (May 15), Derek Poundstone will attempt to pull "two full-size coach buses at the same time," in what is billed as a world record attempt by the Naugatuck police officer who doubles as one of the world's top professional strongman. 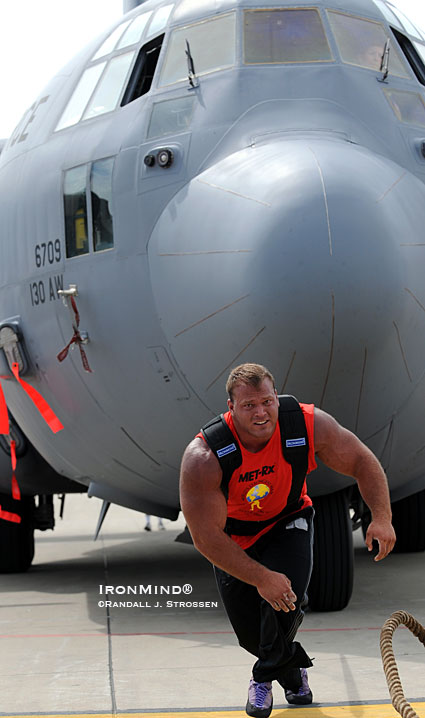 Coming up for air after crossing the finish line at the 2008 World's Strongest Man contest, where Derek Poundstone pulled a Hercules C-130 military transport plane. On Friday, at the Mohegan Sun, the world's strongest cop is going to hook up to two full-sized motor coaches and give them a free ride. IronMind® | Randall J. Strossen photo.


Poundstone's massive pull will be the beginning of a full weekend of top strongman action at the Mohegan Sun, leading up to Sunday's Giants Live competition. Hailing from nearby Waterbury, Connecticut, Derek Poundstone lived up to his predictions when he beat then four-time World's Strongest Man winner Mariusz Pudzianowski for the Mohegan Sun crown, and this year he's back, stronger than ever, although once again he faces some top challengers from across the USA and around the world.

Be there on Friday and watch Poundstone go for broke at 3:00 p.m. in the Mohegan Sun's M parking lot (by the Thames Garage). Admission to this event and tickets are still available for Sunday's Giants Live competition.