London–Even the last minute withdrawals of Ilya Ilin (Kazakhstan) and Zhou Lulu (China) did not mar the Olympic dress rehearsal for Weightlifting as Competition Manager Matthew Curtain and his team hosted athletes, coaches and technical officials from around the world at London’s ExCel Center over the weekend. 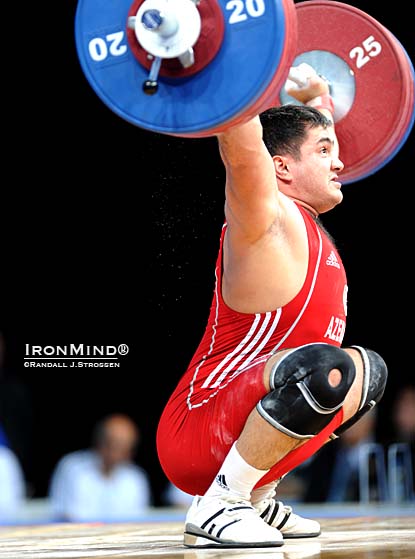 Intigam Zairvov (Azerbaijan) had things pretty much his own way in the men’s 94-kg category at the Weightlifting Test Event as London prepares for the 2012 Olympic Games.  IronMind® | Randall J. Strossen photo.


In addition to testing all systems for Games readiness, Curtain explained, the test event gave athletes and officials who were unlikely to be in London next summer a chance to have a taste of the Olympic experience.

Intigam Zairov (Azerbaijan) won the 94-kg category with a 171-kg snatch and a 206-kg clean and jerk, and Peter Nagy (Hungary) won the men’s +105 kg category with a 396-kg total when Almir Velagic (Germany) missed with the 220-kg jerk that would have leapfrogged him from the silver to the gold medal.

Hats off to everyone who worked so hard to make this event happen and a special thanks to Matthew Curtain and Maggie Lynes (Weightlifting Services Manager) for their kind, continual assistance throughout the weekend.

See you next summer!