London—There was a lot of fantastic lifting in this class, but from start to finish, it was the llya Ilin show as the Kazakh weightlifter not only defended his Olympic title, but he also played with weights that set new Olympic and world records. 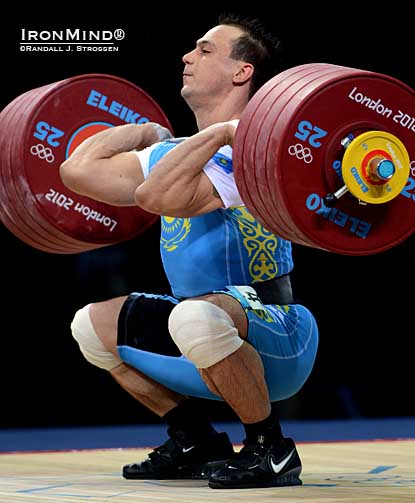 Ilya Ilin (Kazahkstan) cleaned 233 kg  (and then jerked it) as he pounded the field and rewrote the Olympic and world record books on his way to defending his Olympic title in the men’s 94-kg category in weightlifting tonight.  IronMind® | Randall J. Strossen photo.

Hot snatching in this class as few misses marred the action and three lifters ended the session with 185 kg: Ilya Ilin, Alexander Ivanov (Russia) and Kim Min-Jae (South Korea), showing the caliber of this field.  Watching the lifts, one had the feeling that if the lifters had not been playing it somewhat cautiously, the world record would have been attacked and most likely fallen.

Ilin opened with 224 kg in the clean and jerk, for a very easy success, first place and a new Olympic record in the total.  He was so nonchalant about the lift that he never broke his stride as he came up the steps, crossed the platform and launched the barbell.  Mohammadpourkarkaragh (Iran) took 224 on his second attempt to solidify his third-place position, but he missed the jerk.

Looking to move from sixth to third, Andrey Demanov (Russia) took 225 kg on his second attempt and made a valiant effort to keep the bar overhead, but ultimately lost the tussle.  Intigam Zairov (Azerbaijan) took the same weight on his third attempt, trying to move from fifth to third, but he couldn’t rack the bar.  Demanov repeated with the 225 and made a great success with it, although his third-place position was short lived as Anatoli Ciricu (Romania) made 226 kg on his second attempt, going from fifth place to third place—bumping Demanov on body weight.

Mohammadpourkarkaragh must have thought this looked like a good plan, so he called for 226 kg on his final attempt—a success would lift him from fifth to third.  He has a long, deliberate pull; he had to work to stand up, jerked the bar overhead, but lost the lift.
Change the channel and go back to the Ilya Ilin show as he smoked 228 kg on his second attempt —for an Olympic record in the jerk and in the total, as well as a world record in the total.

Cowed by Ilya Ilin?  No way, said Ivanov, and he took 229 kg on his third attempt: a good lift would move him from silver to gold medal position, plus he’d have the Olympic record in the jerk and total, plus the world record in the total.  He cleaned the weight without much problem, but after standing up, he dumped the bar.

One attempt left and you know the drill: back to the Ilya Ilin show and this time he wanted 233 kg for Olympic and world records in the clean and jerk, and in the total.  No nervous pacing or last minute psyching, but this was the one attempt where Ilya seemed to give the weight a moment’s thought—before he blasted it from the floor to arms‘ length overhead.