London—Things were shaken up in a hurry in the men’s 85-kg category when Benjamin Hennequin (France), Sourab Moradi (Iran), Garbiel Sincraian (Romania) and Andrei Rybakou (Belarus) bombed out in the snatch—from there, Adrian Zilinksi (Poland), Apti Aukhadov (Russia) and Kianoush Rostami (Iran) battled it out, with the Pole ultimately beating the Russian on body weight. 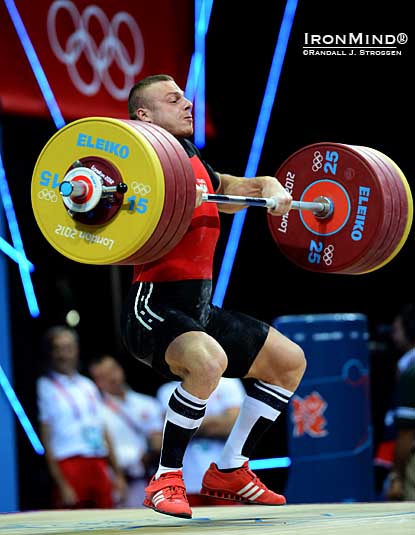 Adrian Zielinski (Poland) pulls himself under 211 kg in what proved to be the winning clean and jerk in the men’s 85-kg class at the Olympics tonight.  IronMind® | Randall J. Strossen photo.


Defending Olympic champion Lu Yong (China) looked poised to defend his title when he led after the snatch, but the wheels quickly came off the car for him when he missed the jerk on his opener, couldn’t stand up with the clean on his second attempt and got blown out the back trying to rack it on his third attempt.

Aukhadov, who was looking strong after three good snatches (ending with 175 kg) and a powerful 205-kg opener in the clean and jerk, made 211 kg on his second attempt to move from third to first.  Zielinski (who had snatched 174 kg) matched the 211 kg, and being the lighter man, he bumped the Russian, who took 212 kg on his third attempt: it would move him back to first place, plus it would break the Junior world record in the total.  He missed the jerk, and Rostami, who had opened with a solid 209 kg, took 214 kg on his second attempt in a bid to move from third to first.  He got slammed trying to clean the weight and when he repeated it on his third attempt, he missed the jerk.

Lots of excitement in the women’s 75-kg class earlier today as well: first, medal favorite Nadezda Evstyukhina (Russia) bombed out in the snatch—missing 125 kg three times, none close.  Svetlana Podobedova (Kazakhstan) broke the Olympic record in the snatch with 130 kg only to have arch rival Natalya Zabolotnaya (Russia) leapfrog over her with 131 kg on the final attempt in the snatches.

Iryna Kulesha (Belarus) won the bronze medal with a total of 269 kg.