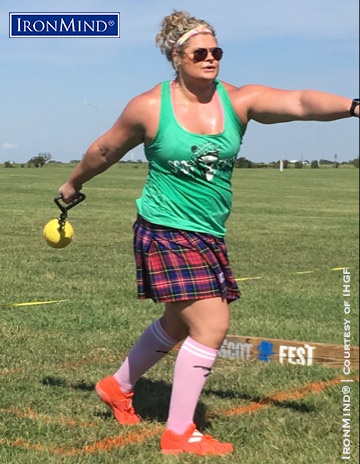 Olivia Tyler won the 2018 Women’s Highland Games World Championships with a performance that include a world record. IronMind® | Photo courtesy of IHGF

The 16-lb. Braemar stone ended in a tie with Tyler and Bridenthal producing putts of 37’, with the win going to Jessica Bridenthal on countback. Frizell was third at 36’.

The 14-lb. weight for distance was launched for some noteworthy distances, with Tyler taking her first victory at 86’ 1”. Marzano followed at 82’ 8”, with Hapner third at 79’ 8”.

The 28-lb. weight over bar was a slugfest, with Greene and Marzano tying at 19’ and the win going to Greene on countback. Frizell was third at 17’.

Only four athletes could turn the mighty challenge caber, 17’ and 90 lb., with McKee and Wilson nailing a 12 o’clock tosses and the win going to McKee on countback. Third was Tyler with a toss of 12:15.

Tyler was crowned the Women’s Highland Games world champion in a fantastic world championships from start to finish. The IHGF would like to thank the athletic director of the games, Sherrie Sweet, festival director Steve Campbell, and officials of HASA, Dave and Gunner Glasgow and Larry and Terri Ventress, and the judges for their hard work in making this such a memorable event.

The opening event, the 22-lb. Braemar stone, was a close tussle between Williams and Summers, with Williams taking the win marginally with 36’ 11” to Summers’s 36’ 9”. Huddleston was third at 32’ 7”.

Summers showed great rotational form in the 16-lb. open stone with a best of 49’ 9”. Second place was a dingdong battle with Huddleston nipping Williams 41’ 3” to 41’1”.

Summers pulled off his second victory in the 28-lb. weight for distance with an enormous throw of 80’ 7”. Second-place Williams trailed at 65’, with Thomas in third at 64’ 1”.

A highlight of the competition, the 56-lb. weight over the bar was won by Summers at a height of 17’. Thomas was impressive at 16” for second, with Williams third at 15’.

The 16-lb. sheaf was dominated by Williams with a winning height of 34’. Second was Buckanoodle at 33’, with Funk third at 29’.

The 19’, 125-lb. caber stymied all but two athletes. Williams slammed home three 12 o’clock tosses for the final win of the competition. Second was Summers with a 12:30 and third Buckanoodle with 75 degrees. 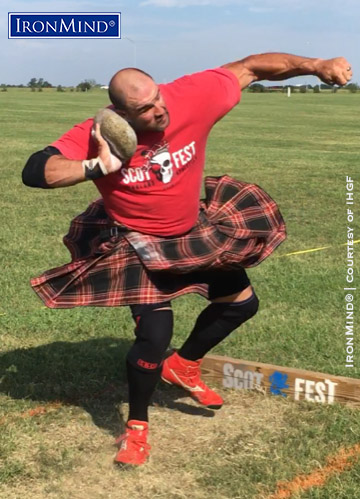