They were there to help out with the Yokota Air Base Strongman Challenge, and from the sound of things, Odd Haugen and Jesse Marunde made quite a splash. 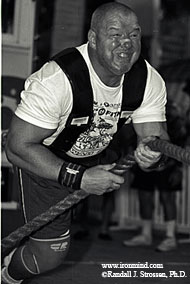 The exuberant Jesse Marunde, said it was, "Fun, fun," and how could you not agree: After dozens of spectators tried to lift the replica Inch dumbbell, with a US$500 cash incentive to succeed, and nobody could do it, Odd, "lifted it easily, carried it over to Jesse, who then effortlessly pressed it."

Jesse Marunde, the consummate strongman showman, was just warming up at this point, because he then walked with it held overhead as he high-fived the line of spectators.

Incidentally, don't think Odd was merely there as Jesse's bag-carrier: After none of the contestants could get the bus to budge, Odd harnessed up, and with a huge effort, he got the bus rolling. Odd kept churning with such ferocity that he accelerated the bus to the point that spectators at the finish line were fleeing from what they apparently thought was a runaway vehicle!