Wroclaw—For a guy who missed his opening snatch and then also missed his third one, Ruslan Nurudinov (Uzbekistan) didn’t seem to be off to a roaring start in the 105-kg class at the World Weightlifting Championships, except that one good snatch (190 kg) was good for the gold medal. 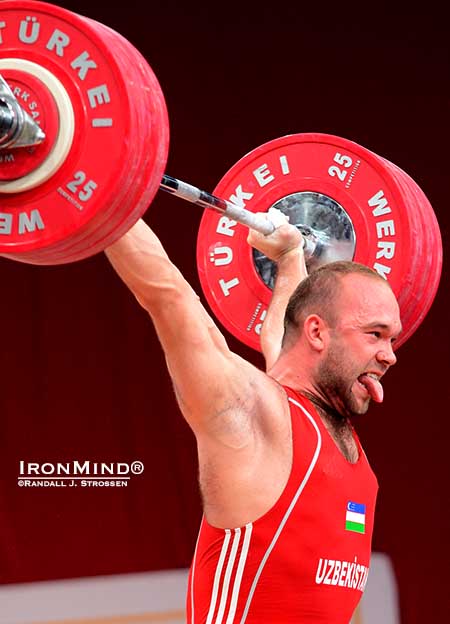 
Reportedly, Akkaev’s back is still bother him and Klokov is doing more TV than training, so Russia’s top gun for this class was David Bedzhanyan, the world record holder in the clean and jerk.

Of course, if you’re Polish, these guys are background because your focus is on Marcin Dolega and Bartlomiej Bonk.

Dolega swung and missed three times in the snatch, but Bonk saved the hopes and dreams of the fans rocking in the stands as he made three good snatches, scoring a silver for his 188-kg third attempt.  Aleh Loban brought the bronze medal back to Belarus (182 kg).

Anyone who might have questioned Nurudinov’s horsepower only needed to watch him clean and jerk: he opened with 225 kg and moved up in 5-kg steps, chalking up three good lifts, and watching how he stood up with and then jerked his 235-kg third attempt said that no matter now much Nurudinov likes to celebrate by sticking out his tongue, this guy’s strength is nothing to joke about.

Bedzhanyan had opened with 220 kg, which he power jerked while barely having to rebend his knees; moved to 225, which was still easy, but not the way his opener had been; and then called for 236 in a bid to wrest the gold medal in the jerk from Nurudinov—after cleaning it, he missed the jerk.  Mohammad Barari (Iran) got the bronze medal in the jerk with 221 kg.

So, the guy who missed his first snatch ended up beating his closest pursuer by a whopping 20 kg in the total, showing that it’s not how or where you start—it’s the finish that counts and if you want to maybe stick your tongue out along the way, that’s ok too.