Jessen Paulin flexed his muscles on the second day of the North America's Strongest Man contest, moving into first place. 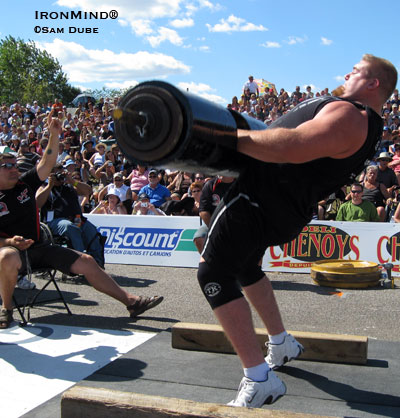 The second day of the North Americans got off to a fantastic start with the power stairs event.  Each athlete had to scale five 16" stairs with three separate weights: two at 425 pounds, and the third at 475 pounds.  With the support of his vocal fans Corey St-Clair emerged late in the event as the man to beat, only missing the very last of the fifteen stairs after three heroic attempts to pull the implement to completion.  Corey can do no wrong in Quebec!

Inspired by his countryman's performance, Josh "The Natural" Thigpen became the first man to complete the event, doing so with roughly two seconds left in the 75-second time limit.  He celebrated by standing atop the stairs in victory, pulling off his belt and shirt and pointing to the sky, all with the adulation of the crowd.  Just when you thought it couldn't get any better than this, an absolutely possessed Christian Savoie shocked everyone by finishing the event in 44.55 seconds, destroying The Natural's time.  But there was one man left: Jessen Paulin, the reigning North American champion, on a mission to regain lost points from yesterday's events.  It was a valiant performance, and the seconds before his time was announced seemed a near eternity . . . 45.45 seconds, enough for second place, but not enough for the win.  It was an incredible beginning to an awesome day.

The log lift was contested next, and consisted of a 280-pound log lifted overhead from the ground for repetitions.  Ryan Bekke from Phoenix, Arizona managed 7 reps using beautiful push jerk technique, while Paulin muscled up the same number.  But the surprise was "Handsome" Pete Konradt, who practically strict-pressed 8 reps for the win.  After losing a rep due to jumping the referee's down signal, Thigpen let loose his grip on the log, ending his set, as is was stated that one hand must remain in contact with the log at all times.  The Natural took the disappointment in stride.  Unfortunately, strong Canadian presser and current Ontario's Strongest Man Jose Plante suffered a proximal tear of his right biceps during the clean of his fourth rep, and tearfully announced his retirement from the sport right after the event.

The last event of the day, the truck push and train wheel load, was a new event this year.  Each athlete had to push an 8,000-pound pickup along a 90' course, where train wheels weighing 250, 280, 320, 370, and 415 pounds had to be loaded vertically onto the flat bed at the 10-, 30-, 50-, 70-, and 90-foot marks respectively, all within 75 seconds.  Due to the scoring system, what emerged after the smoke cleared was a seven-way tie for first place in the event:  Higa, Savoie, Frame, Parkes, Bekke, Paulin, and Konradt all managed to load the fourth wheel.  The athletes generally liked the event, and with some scoring modifications, I'm certain we'll see it again in the future!

So at the end of Day 2 the standings and points are as follows: