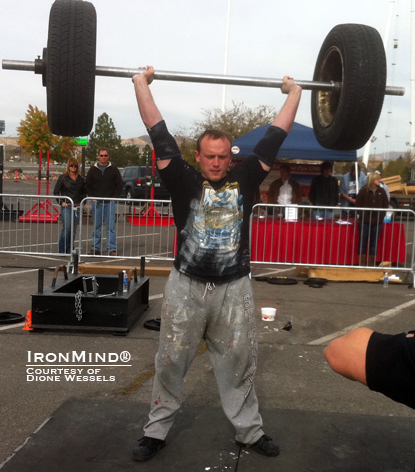 Jeff Peterson on the IronMind Axle clean and press for reps at the NAS nationals.  IronMind® | Photo courtesy of Dione Wessels.


“We had 140 athletes competing over the course of two days,” Wessels said.  “The new ASC lightweightt professional is Zack Nims of Seattle, Washington.  Zack had an impressive two days and was the only lightweight to load the 390-lb. stone.  Zack's win qualified him for the Arnold amateur strongman world championships.

“We also had the America's Strongest Woman in conjunction with the men this year.  In the lightweight division, Erin Watermann won; American gladiator Jamie (Fury) Kovac wins; and Melissa Garrett dethroned the three-time champion Kristen Rhodes for the America's Strongest Woman title.   It was a great competition, great crowd, and crisp chilly skies."