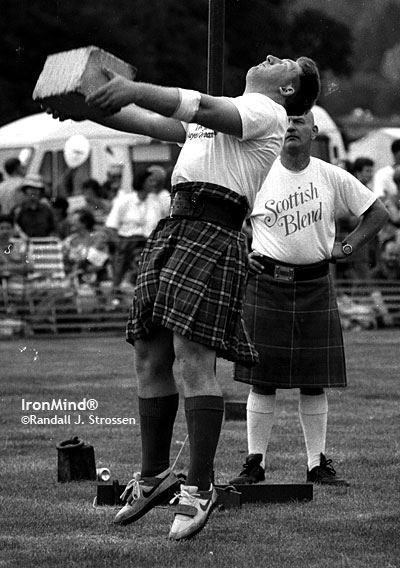 There is a quite a of tradition of strongman-Highland Games crossover. Here's Iceland's Andreas Gudmundsson competing in Callander, Scotland in 1994, in a weekend that had both the European Musclepower Championships and Highland Games World Championships on the same field. That weekend, four-time World's Strongest Man winner Magnus Ver Magnusson took a break from strongman and was competing in the Highland Games World Championships, where he took third place. Incidentally, that's Jim Pollock, also of World's Strongest Man fame, keeping a sharp eye on things as Andreas unloads on the weight for height. For more details on that historic weekend, be sure to read the October 1994 issue of MILO®. IronMind® | Randall J. Strossen, Ph.D. photo.