He was casual about it at the GNC Grip Gauntlet at the 2004 Show of Strength in Atlanta . . . low-gearing his way through a No. 3 Captains of Crush® gripper in a way that left Wade Gillingham and Randall Strossen saying, "Joe Kinney!" 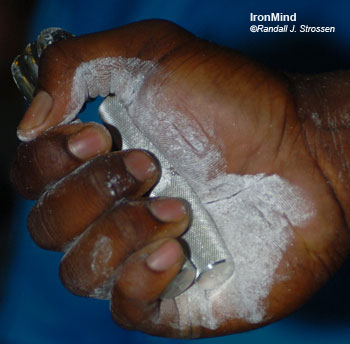 It was like child's play for Tex Henderson: Under the strictest conditions with just about every witness you would love to have there, Tex Henderson "demolished" the No. 3 Captains of Crush® Gripper last summer. IronMind® | Randall J. Strossen, Ph.D. photo.

Then, at Sorinex, no less, surrounded by everyone there for the Diesel Crew's 2006 Global Grip Challenge, Tex Henderson demonstrated what a world-class crushing grip is all about: He certified on the No. 3 Captains of Crush®, demolishing the vaunted No. 3 with such ease and under such strict conditions that the grip world was left asking, "Who is this guy and how did he get so strong?"

Hang on, though, because you know that there's a lot more fuel in Tex's tank, and so when he got his hands on a No. 3.5 Captains of Crush® Gripper, after a couple of tries, Tex told IronMind® he closed it . . . and this was done in the same style as his otherworldly grip performances you have already heard about.

Not a bad way to follow up on what he did at Sorinex last summer and a nice complement to winning the South Atlantic strongman contest last weekend - keep your eye on Tex because the best is yet to come. 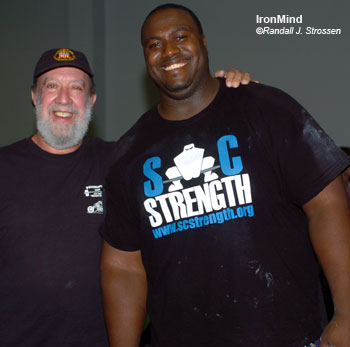 Will Millman - the man who invited Tex to the 2006 Global Grip Challenge, so that he could demolish a No. 3 Captains of Crush® Gripper in front of some of the top names in the grip world - and the man himself . . . Tex Henderson, one of the absolute top performers in the world of grip strength. IronMind® | Randall J. Strossen, Ph.D. photo.