Pyeongtaek, South Korea—All eyes were on the 85-kg class at the Asian Weightlifting Championships as it featured 2008 Olympic gold medalist Sa Jaehyouk (Korea) and the junior and senior world champion Kianoush Rostami (Iran). 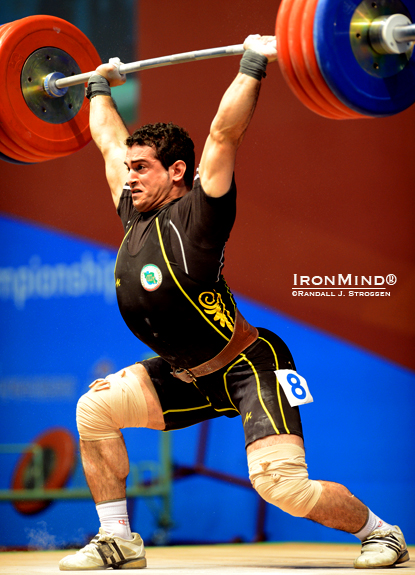 This might not be a style that someone would coach, but the results would please anyone: Sourab Moradi cleaned and jerked 216 kg to win the 85-kg class at the 2012 Asian Weightlifting Championships.  IronMind® | Randall J. Strossen photo.


The competition hall was packed with both fans and TV cameras, showing how a star weightlifter can draw attention.

In addition to the two established competitors, Sourab Moradi (Iran) was expected to be in the fight for medals.

Of the big three, Sa Jaehyouk was first out in the snatch, making 162 kg.  He fought to save 167 on his second attempt and the two Iranians nailed 168 on their openers.  Sa Jaehyouk missed 171 on his third attempt, opening the door for Rostami and Moradi.

On their second attempts, Rostami made 172 kg with an adjustment in the bottom and Moradi ripped the same weight.

Even though they had turned out en masse to support their man, it was apparent that the Korean fans were extremely respectful toward the Iranian lifters: the prayers shouted out by the Iranians amused the Koreans but they warmly applauded the lifters (quite unlike the Iranian fans booing Chigishev, mid lift, when he was dueling with Rezazadeh, for example).

Rostami, who was still wrapping his wrists with 30 seconds to go, sent 175 kg up and over his head on his third attempt and Moradi missed the same weight in front.

Positions looked primed to change in the clean and jerk as Rostami lowered his opener from 210 kg to 201 and Sa Jaehyouk increased his from 200 to 203.  Moradi sat tight with 210.

Rostami had a false start with 201, getting the bar to ankle height before putting it down and doing it again, with feeling: the lift looked O.K., but he grimaced a little after making it.  Sa Jaehyouk smoked the clean on 203 and punched up the jerk.  Both lifters called for 211 on their second attempts, wanting to follow Moradi, who opened with 210.

Moradi’s clean would not have broken any speed limits, but he capped off the lift with a quick, easy jerk.

Rostami took 211 on his second attempt, eyeing first place in the jerk and in the total.   He made a good lift, but once again, he finished with a grimace.

Sa Jaehyouk took 213 on his second attempt, which would move him to first in the jerk (on body weight) and third in the total.  The clean was solid but not easy—he exploded on the jerk, but shot the bar over his head and lost it behind, and his third attempt was largely a repeat of this lift.

Moradi took 216 on his second attempt, for first in the jerk and in the total, bounced at the bottom of the clean, and then missed the jerk.

Rostami came out for 216 but only pulled it before, you guessed it, grimacing.

So now the ball was handed to Moradi: 216 for top honors in the jerk and in the total and that’s just what he got.

No world records, but three attempts in the clean and jerk at 216 kg and the very light (for this class) Sa Jaehyouk gave 213 kg quite ride.  With talent like this, who wouldn’t bet that this record will be broken in London?