Bucharest - Continuing the pattern of many new, young faces in the competition, 22-year-old Nikalai Charniak (Belarus) prevailed in the 77-kg class at the European Weightlifting Championships, although he was pushed hard by junior Erkand Qerimaj (Albania), and the young Russian, Dmitry Ivanenko, was not far behind. 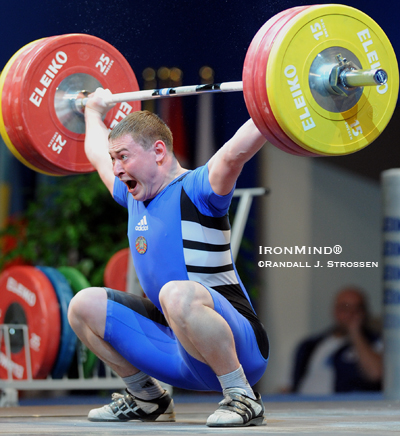 Nikalai Charniak (Belarus) hit this 155-kg snatch on his second attempt at the European Weightlifting Championships, where he won the silver medals in the snatch as well as the clean and jerk, and the gold medal in the total. IronMind® | Randall J. Strossen photo.


Showing how close the competition was, Dmitry Ivanenko (Russia) won the gold medal in the snatch with 156 kg, Nikalai Charniak got the silver medal with 155 kg, edging out Viktor Guman (Slovakia) on bodyweight. Ivanenko had sailed through three good lifts (151, 155 and 156 kg), while both Charniak and Guman made 150 and 155 before missing 157 kg. Qerimaj, who would end up being a major factor in the competition had only succeeded with his first attempt in the snatch, 152 kg, which put him in fourth place going into the clean and jerk.

Of the leaders, Ivanenko opened first in the clean and jerk, making 181 kg. He missed the jerk with 185 on his second attempt and then came back to make a good lift on his third attempt. Charniak hit 183 kg on his opener, and Qerimaj made 186 kg on his first attempt, with an easy power jerk. Charniak went on to make 187 kg and then 189 kg, which would prove to be the winning total. Qerimaj made 190 kg on his second attempt, for the gold medal in the clean and jerk, and in a bid to overtake Charniak on his final attempt, he cleaned 192 kg, but missed the jerk.