In September 2005, California's Ken Brown continued his pattern of breaking the world record in the silver dollar deadlift in Gatineau, Quebec. 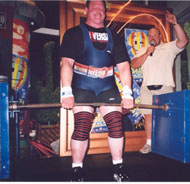 Well, records are made to be broken and guess who's coming back to Canada for another assault on gravity?
Star Canadian strongman Hugo Girard told IronMind® that on May 27, in Quebec City, he is organizing a contest called Night of Champions that will have a very interesting format.

This should be a great contest - a lot of fun, big numbers, and a chance to soak up the terrific strongman atmosphere unique to Quebec.