Courtesy of Dr. William Crawford, of full sterkur fame, we have a report on this weekend's New Hampshire Highland Games, which had a mixed Highland Games and strongman format. 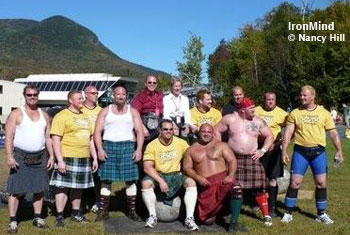 "This is a brief report from the New Hampshire Highland Games that featured the Highlander Games, a hybrid of Strongman and Scottish Heavy Events. The events on the first day were the 100-lb. stone toss, 56-lb. weight over bar, The Loon stones carry (a farmer's walk with Dinnie stone-type implements) and the caber toss. Sam McMahon won the Loon Mountain stone carry with a record walk of 101 feet. These stones weigh 507 lb. combined but are deceptively difficult because of the small thick rings. The second day's competition included the log press, the Husafell stone carry, caber toss for distance and the day ended with McGlashan stone loading. Wout Zijlstra won the Highlander Games with relentless pressure from a very strong field after completing all five of the McGlashan stones in strong fashion.

The final standings in the Highlander Games were:

Magnus Ver Magnusson was the guest judge and did a great job of tweaking the events to keep them more interesting and challenging. Art McDermott again did a stellar job as announcer and bringing top notch, world-class implements.

The New England Amateur Heavy Events Championships saw a great battle between Sam Grammar and Robert Troupe with Sam pulling out a great win on Sunday."