Athens – He looked drawn and not overly confident during the introductions, but when the rubber hit the road, Halil Mutlu (Turkey) made the lifts he needed for his third Olympic gold medal, and he had enough gas in his tank to try for world records in both the snatch and the clean and jerk. 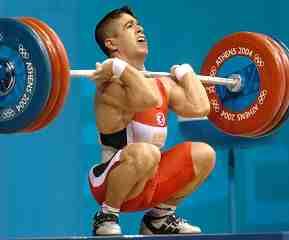 Halil Mutlu racks 168.5 kg in an attempt to break his world record in the clean and jerk. IronMind® | Randall J. Strossen, Ph.D. photo.

Mutlu used to be the nightmare of every other competitor in this category, and when he returned tonight, it was evident why he holds all three world records.

Wu Meijin (China) was seen as Mutlu's primary rival, and he didn't disappoint in his bid to overtake the man called "Little Naim." Wu was brimming with confidence and made a nice opening snatch, 125 kg, and when Mutlu had to step back to save his first attempt, 130 kg, the door seemed like it had been cracked open. Wu missed 130 on his second attempt and made it on his third, for a nice success, but Mutlu wasn't done. He made a good 135 kg snatch on his second attempt and then, just to show the kind of numbers he's used to, he called for 140 kg on his third attempt. Tonight at least, his world record of 138.5 kg was safe.

Wu opened first in the clean and jerk, with 157.5, and he had to work to stand up with the bar after racking it. Mutlu followed with an easy 160, and Wu turned up the heat by calling for 165. The bar came off the platform so slowly you wondered how Wu could get under, but he did, although he could not stand up. Mutlu called for the same 165 on his second attempt and following a pretty routine clean, he seemed to be under the jerk, but dropped it. Wu came back with 165 again, racked the weight easier this time, managed to recover, and he drove the bar to arms' length, but it crashed down. Mutlu, having just won his third Olympic gold medal in weightlifting, deserved to have some fun, so he called for 168.5 kg on his third attempt, aiming to break his world record in the clean and jerk, and while he racked it, that was as far as the lift got. Sedat Artuc (Turkey) won the bronze on body weight, with 125/155.